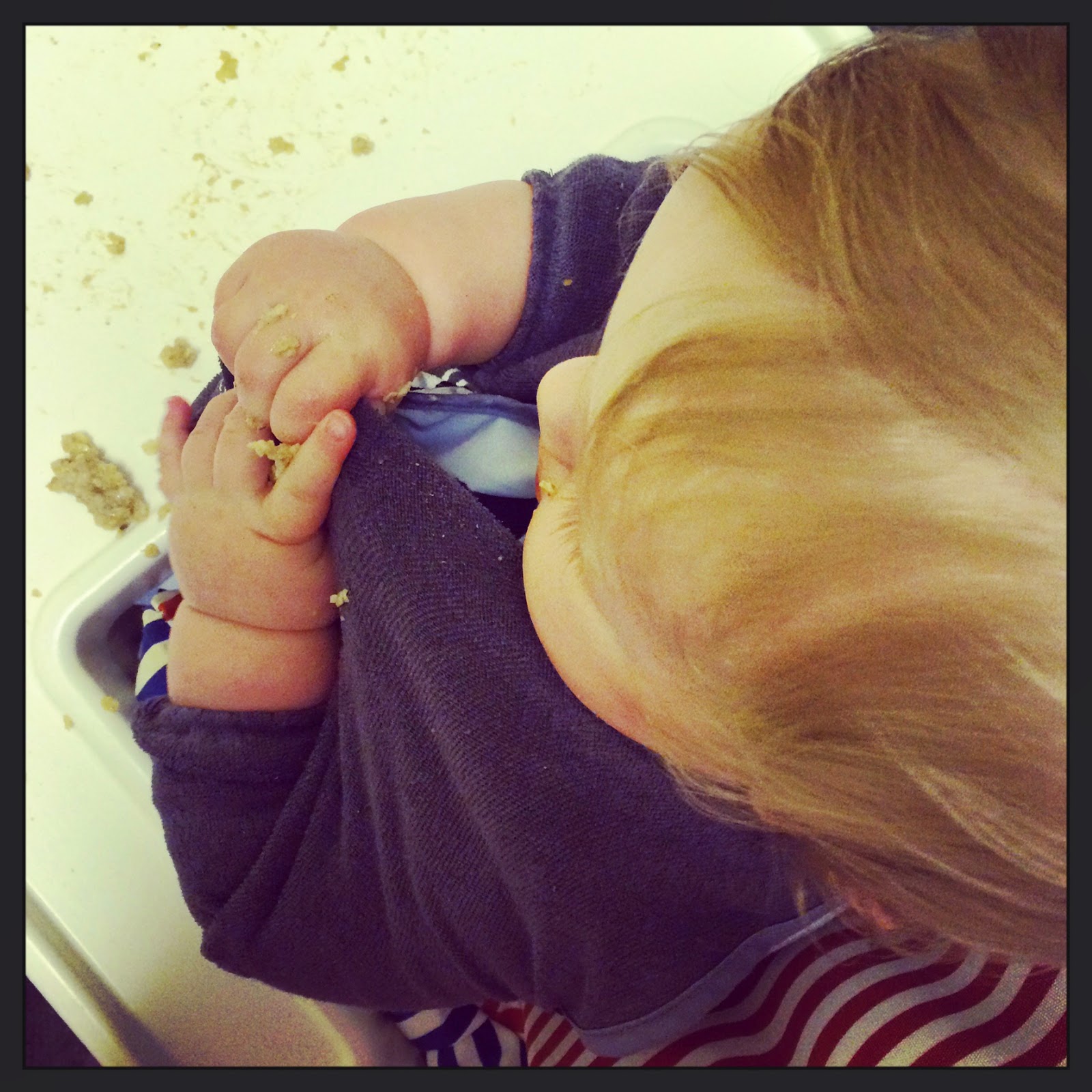 Every time I speak to someone about weaning their baby I hear a different story. Some little ones are into food from day one, others take their time in learning to love their grub. Lots of people make a deliberate choice to BLW, others sort of fall into it like I did. I love hearing about all the different journeys other Mums, Dads and babies have been on; everyone seems to have different challenges along the way and it's helpful to know that when your baby is joyfully lobbing mashed potato at the wall or refusing to eat anything except raisins, the chances are that someone else has been there (and come out the other side!).

I asked my Instagram and Facebook buddies five quick questions to get the lowdown on their weaning adventures. The variety of answers in just this small group of people is really interesting but there are a couple of reoccurring themes from this wise little bunch:

Trust your instincts, trust your baby and eventually you'll both figure it out.
In the meantime - enjoy yourself!

"Little Dude's absolute refusal to be spoonfed. We battled with purée for a month or so then switched to BLW. We've never looked back!" @blwmamauk

"I was actually very anti BLW at first, wasn't until I watch a video - yes video at my local Health Centre that I got to understand more about it and saw the benefits of BLW. Then when I showed my husband YouTube clips he was adamant that was the route we would take." @blwinspiration

"I decided to do BLW after watching a good friend of mine do it with her son. I was terrified and wasn't completely on board...until my daughter reached on my plate at 6.5 months and took a piece of meatloaf off and tried to eat it. From that point on we have been strict BLW" @babiesgotsnack

"I had read about it but was scared about choking and stuff. I started with purée and oddly my baby could self feed herself at 5 months [yes early - but she was ready, proper ready, holding her head up, 5 teeth, could sit and stand independently, showed an interest in food and hand to mouth coordination] :/ a few of my other friends were doing BLW so I tried her with stuff. She preferred it and we carried on- the rest is history!" @azalea_and_mum

"My pal did it with her wee boy while I was pregnant so I read up in it and just went with it!" @vblogg

"A few friends tried it and sounded good. Fitted with my lifestyle. As a single mum, I liked the idea of eating together (rather than me feed him then eat myself)." @asbellina

"I choose BLW as my sister done it with my 2 nephews. I was pretty sure I would do a combination of BLW and purées as I was terrified when I had to give the boys lunch when I was babysitting. Turns out (like most things) it's totally different when it's your own little bundle and I haven't puréed a thing!" @twelvetwelvebaby

"It just seemed like a no-brainer to me. I read the BLW book when Millar was about 4 months and it all just made sense. I liked the idea that it was fun and gave the baby control" @suzie_crossland

"Feeling that there's not much nutritional value or fun in rice cereal and advice from nurses at the hospital who were (very surprisingly) pro-blw. They didn't call it that, but suggested to forgo the cereal and start with strips of cooked veggies and chicken (same thing!)" @cookingforgrey

"Chose BLW after seeing so many other kids at my job (preschool teacher) and my daughter's cousins who were being bribed, coaxed and tricked to eat. I wanted my daughter to have a self awareness of her eating and a good relationship with food." @ashjos

" had read a bit about it online when my daughter was a baby and got the boom when she was about 4 months old. It seemed to follow on naturally from on-demand breastfeeding for me, and since weight problems run on my side of the family and fussy eating runs on my husband's side, we thought it would be a great idea. It went so well with our daughter that we didn't even think twice about doing it again this time round with our little guy." @aoifekids


I'll post the answers to the other 4 questions shortly once I've caught up with them all... :)

BLWmamaUK
Mama to a Little Dude who hates the spoon! No gimmicks, just real food for real mums. NOTE - I am NOT an expert or health professional, just a mama sharing my own experiences and ideas.